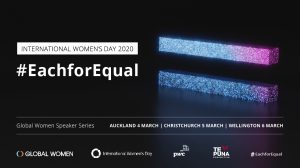 Global Women, in association with PwC, present our 2020 International Women’s Day speaker series. The global campaign celebrates the social, economic, cultural and political achievements of women – while also marking a call to action for accelerating gender equality. This year’s campaign theme #EachforEqual, is drawn from a notion of ‘Collective Individualism’ which is a call to use individual action towards the collective outcome of creating an equal world.

Hear from a stellar line-up of remarkable and diverse speakers as they share their personal perspectives on what #EachforEqual means to them and how they are each contributing to a more balanced and inclusive Aotearoa and world.

Tickets sell out quickly, so you know what our advice is…

Dr Anita Sands is a U.S. based board-director, author, and speaker. A former Fulbright Scholar, she holds a Masters in Public Policy and Management as well as a Ph.D. in Atomic and Molecular Physics. Anita spent a decade in leadership positions in financial services in Canada and the U.S. specialising in innovation and enterprise transformation. She then pivoted into the tech industry where she serves on the boards of two public companies – ServiceNow and Pure Storage – and private companies ThoughtWorks and AppBus. Described as a ‘force of nature’ with unique perspectives, Anita is also a vocal advocate for diversity and inclusion and has been honoured on many occasions for her contribution to business and social challenges. Originally from Ireland, Anita splits her time between San Francisco, New York, and Dublin.

Avalon Biddle is the New Zealand Supersport 600cc Champion – she made history as the first woman to ever win this coveted crown in Kiwi motorcycling in 2019. In a sport dominated by males, Avalon is showing the boys how it’s done. She has competed in Australia, Japan and Europe and has won the European Women’s Championship twice. Avalon’s love of racing was inspired by her Dad’s love of motorsport and when she turned 13 she began Junior Road Racing competitions and has never looked back. Outside of the track, Avalon is passionate about getting more females into riding and improving rider safety.

Ziena Jalil is a Consulting Partner for public affairs firm SenateSHJ while also running her own consultancy focused on international marketing and business development, and diversity and inclusion. She’s a board member of Auckland Tourism, Events and Economic Development (ATEED) and the Cancer Society Auckland Northland, and an advisory board member of New Zealand Asian Leaders. Prior to joining Senate SHJ, Ziena spent 10 years in Asia, in the roles of Regional Director – South and South East Asia for Education New Zealand, as New Zealand Trade Commissioner to Singapore, and as Head of North Asia Marketing and Communications for NZTE. She has received several international awards for her work promoting New Zealand trade, investment and education in Asia. More recently, she was a finalist in the global category of the New Zealand Women of Influence awards.

Frank Olsson is the honorary Swedish Consul for Auckland. He was born and raised in Sweden and has had a successful career in international finance. He has been the Chair of two New Zealand environmental organisations and a director of several corporate and charitable organisations. Currently he is President of the NZ Europe Business Council, board member of the NZ Scandinavia Business Association and Chairman of the Auckland Chamber Orchestra. He has just published a management book “Learning To Dance – Corporate Style” and is a renowned speaker and mentor on business leadership and gender equality.

Angela Meyer is the founder and co-director of Double Denim – a creative agency and consultancy specialising in Gender Intelligence. She has a long and proven track record for being an industry and community champion for Equal Pay and Gender Equality. She has twice been nominated for the Westpac Women of Influence Awards (2016 and 2018). In 2012 she co-founded the Ace Lady Network which has developed into a 7000 strong community of women – the online network promotes and advocates on gender equality and provides tangible resources for women to help them fight the status quo in their own workplaces. Angela is on the board of One Percent Collective and the board of Wellington IABC (International Association of Business Communicators).

Annah Stretton along with being a well-known and successful entrepreneur and the founder of the Annah Stretton fashion label – is also the founder and CEO of RAW (Reclaim Another Woman). Established in 2014, RAW aims to help break New Zealand’s ever-growing cycle of intergenerational offending, educational underachievement, persistent poverty and violence for disadvantaged women. Through inclusion, community and opportunity, RAW is building hope, purpose and prosperity one woman at a time – creating mana wahine, and turning lives of crime into lives of promise. RAW is the first programme of it’s kind in NZ and has had a staggering success rate, now fully endorsed by the Department of Corrections. Annah has received an Order of Merit for her services to business, fashion and the community. In addition to her roles above, she also chairs the board of Waikato Women’s Refuge and sits on the UNICEF NZ board.

Laura Douglas is an advocate for the mental health of young women and founder of Southern Girl Finishing School where she hosts workshops for young girls teaching them a series of practical skills like changing a tyre, cracking a stock whip, clay-bird shooting and learning how to secure loads with strops and tie downs. She is also the founder of Real Country Farm, a place where visitors can experience an authentic farming experience.

Dame Denise L’Estrange-Corbet DNZM, is Co-founder of the renowned New Zealand fashion brand WORLD.  Denise is also an Ambassador for Diabetes NZ, the Mental Health Foundation, and is the IHC Art Awards Ambassador. She has shown a huge commitment to people with disabilities – including artists – and has been instrumental to the growing success of the IHC Art Awards.  Last year to celebrate WORLD’s 30th year, and her 10 years of working with the IHC Art Awards, WORLD launched the ‘WORLD Legacy Project’, with the profits from this, going to the super talented IHC Artists. WORLD has designed t-shirts for the Starship Foundation, bow ties for Muscular Dystrophy and t-shirts for the Leukaemia and Blood Cancer Foundation, amongst many others. She is also a published author – her autobiography, ‘All that Glitters’, published by Random House went straight it at number 2 on the Bestsellers List. She was made a Dame in 2018 for her services to fashion and the community.

Tupa’i Peter was one of the stars of the Global Women ‘Kiwi Dads’ photographic exhibition last year, featuring 13 stay-at-home dads and promoting men and women as equal carers who deserve equal access to paid parental leave. Around 30,000 Kiwi women took paid parental leave in 2017, while the figure for men was an abysmal 300. When his second daughter Frances was four months old, Peter left his job as a Principal Policy Advisor with NZQA to be the stay-at-home-parent for both their daughters while his wife Georgina went back to full time employment. He has no regrets and says there were very many rewards. Peter and his wife have now traded in their Wellington City jobs for country life in Mid Canterbury, allowing them both to have more time with their daughters.

Daisy Lavea-Timo is the Southern Regional Manager for the Ministry of Youth Development, charged with keeping a finger on the pulse of youth engagement and youth development across the South Island. She is also a successful poet, rugby league prop and producer. Crowned the 2017 New Zealand Slam Poetry Champion, Daisy’s poetry ciphers around talanoa‐dialogues about identity, purpose and leadership. She believes in the power of words and holding the vā/spaces for people to share their own stories. Her professional background includes roles across NGO, government, education, sporting and consultantancy. Daisy is passionate about helping people, communities and organisations grow.

Susan Coleman has been the Chief Executive of GirlGuiding New Zealand for the past eight years and has led the organisation through a huge period of macro-change in order to achieve its goal of being the leading organisation for girls and young women in NZ. From mobilizing and empowering a volunteer base to the controversial decision to cease the sale of the iconic Guide Biscuit, Susan has risen to the challenge to create a strong and vibrant organisation that enables girls and young women to develop into confident leaders in their communities.

Jennifer Ward-Lealand Te Atamira CNZM has worked extensively in theatre, film, television, musical and radio for over 37 years. She was a founding board member of the Watershed Theatre and a co-founder of The Large Group and The Actors’ Program, is currently President of Equity New Zealand, Patron of Q Theatre and Theatre New Zealand, and serves as a trust board member of the Actors Benevolent Fund.  Jennifer was named a Companion of the New Zealand Order of Merit “for services to film, theatre and television” in the 2019 New Year’s Honours list, won a Women of Influence award for Arts and Culture in 2019 and a SPADA Industry Champion award in 2018. She is a finalist for New Zealander of the Year, 2020. Jennifer has been a keen student of te reo Māori since 2008, and in 2017 was gifted the name Te Atamira (The Stage) by Sir Timoti Karetu and Te Wharehuia Milroy.

Dr Farah Palmer was the first woman ever appointed to the board of NZ Rugby (in 2016). She captained the Black Fern’s to three consecutive Rugby World Cup wins and during her time as captain the Black Ferns lost only once. She continues to serve on the board of NZ Rugby and has also served on the NZ Māori Rugby Board since 2007. Farah will share her views and personal experiences around the inequality that still exists in NZ sport and the measures she and NZ Rugby are taking to create a more balanced playing field ahead of the NZRC2021.

Vivien Maidaborn has been Chief Executive of UNICEF NZ since 2014 and is a leading public advocate for people with disabilities and for children’s rights. She was previously CEO of CCS Disability Action and CEO of Relationship Services. She firmly believes the ability to scale social change depends on grassroots acumen – having muddy boots at the decision making table, with research, data and ability to activate people. In this way, she is determined to deliver better outcomes for the Worlds children. Vivien was appointed a Member of the New Zealand Order of Merit (MNZM) in 2019 for her services to children and the community.

Louisa Wall is a member of the New Zealand Labour Party and has been a Member of Parliament since 2008. She is currently the MP for Manurewa, chair of the Health Select Committee and a member of the Foreign Affairs, Defence and Trade Select Committee. Louisa’s work is founded on a commitment to universal human rights together with promoting the rights of gender and sexual minorities. In 2013, same-sex couples gained the right to legally marry in New Zealand, a change in legislation driven by Louisa. And in 2015, she participated in the development of a United Nations kaupapa launching the Free & Equal Campaign in the Pacific – this initiative seeking to challenge negative gender stereotypes and sexual minorities and to promote measures to protect the human rights of everyone, regardless of sexual orientation, gender identity and intersex status.

Sophie Handford at just 18 years of age, has already forged an impressive career as an activist and change-maker. She is the national coordinator of School Strike for Climate NZ and the force behind successfully mobilising more than 170,000 children and adults to take action in 2019. She was also recently elected to the Kāpiti Coast District Council, making her one of New Zealand’s youngest-ever local government representatives. And she was joint winner of the Wellingtonian of the Year supreme award in 2019.