Join us on 9 Feb for our exciting Waitangi Day webinar to kickstart the year! 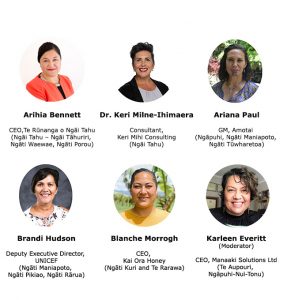 Ko te whānau te mea tuatahi – Family comes first; everything I touch and do must be about the whānau way. Whānau wellbeing underlines every aspect of the role of Chief Executive Officer of Te Rūnanga o Ngāi Tahu. As the iwi works towards improving intergenerational health, wellbeing, education and financial security, Arihia is committed to helping whānau to take charge of their own lives. Arihia began her career in health and social services in 1979.

Arihia has held advisory positions to government, including Canterbury Earthquake Recovery Commissioner (CERC) following the September 2010 earthquake. She has held governance roles associated with Te Rūnanga o Ngāi Tahu, including Ngāi Tahu Development Corporation, where she was a director from 1999-2002, and then chair until 2005.

Raised in Maniapoto, Brandi has of wealth of experience in local government, Treaty of Waitangi settlements, Māori business development, health promotion, education, as well as sports and recreation. Brandi was the inaugural CEO of the Independent Māori Statutory Board, Tāmaki Makaurau from 2011-2020 and a Director and Associate Professor at Waikato University.

Ariana leads the dynamic, small, yet high performing team of Amotai. Amotai works across Aotearoa to advocate for Māori and Pasifika businesses, connecting and matching them with public sector, private sector, iwi and non-government organisations, and promoting supplier diversity. Ariana is passionate about education, health and wellbeing, and community services and has dedicated the past 25 years to working with iwi and Māori in senior leadership roles and as a consultant. Having started a few small businesses and a Charitable Trust, Ariana believes that regardless of the size of a business, it has the potential to make impacts of significance and she is driven by reaching outcomes that improve the lives of whānau and communities. Ariana believes that having a deep connection and understanding of Te Ao Māori and passion for serving Pasifika, is the way forward to authentically leading this change throughout Aotearoa.

Blanche started whānau business Kai Ora Honey in 2012, exporting 50 tonnes of manuka honey to customers in Asia, the United States, Australia, the United Kingdom, and Kuwait. Kai Ora arose from the vision of Blanche’s late grandmother and father, Rapine Murray. Relationships with whānau, hapū, iwi and with local, regional, national and international groups are the foundations of Kai Ora. Raised in Te Hapua and Awanui, Blanche hopes to use her business model to lay solid foundations for generations to come so that they can live, work, educate and raise families positively in Te Tai Tokerau. In 2017 Blanche received the University of Auckland Young Māori Business Leader award and she works closely with groups like Māori Carbon Collective, Scion & MPI to discuss issues around the future of forest biodiversity and sustainability.

Dr Keri Milne-Ihimaera has over 16 years experience in leadership roles providing a Maori woman’s perspective in the areas of education, leadership, people and strategy. She completed her doctorate of Māori development and advancement in 2018 and since has enjoyed working in consulting roles, continuing to build her reputation as a disruptor and provocative leader. She wants to ensure her mokopuna are able to live as Māori and achieve as Māori. She believes this won’t happen without brave, bold leadership and audacious decision making.

Karleen holds a Masters in Management from the University of Auckland and is CEO of Manaaki Solutions Ltd, which she founded in 2006. She has held various governance roles across Tai Tokerau and was the first wāhine and Māori to be appointed as the Chair to Northland’s Regional Economic Development Agency, Northland Inc. Karleen has held a number of governance roles, serving both Māori and non-Māori entities and currently sits as Deputy Chair of the St Stephen’s and Queen Victoria Schools Trust Board. Karleen is passionate about social and economic opportunities for wahine leading their own pathways to truly empower themselves locally and abroad.