News Reports on Champions for Change

This article is a repost from NBR. Author: Dita De Boni

The Champions for Change group of 39 companies, which have committed to reporting on, and growing, gender and ethnic diversity at their upper levels, are one woman short of meeting a target minimum of 40% of women on their boards after four years in operation.

But non-Pākehā participation on boards continues to lag despite being a focus, with fractionally over 10% of all board members of these companies identifying as Māori, Pasifika, Asian or another ethnicity. Although reporting of this metric continues to evolve, on the numbers, this is a drop from the last time the data was reported in 2019, when the figure was nudging 20%.

Board membership is but one metric released by Champions for Change looking at their management and non-management participation by both women and non-Pākehā in today’s Diversity and Inclusion Impact 2020 report. Its data finds that across key personnel, executive, senior manager, other manager and non-manager level, female participation has increased both proportionally and in absolute numbers.

Women comprise some 35% of key management personnel and executive and general managers, almost 40% of senior and other managers, and just under 50% of the wider workforce, within the Champions for Change Group. That is a small increase on these categories the last time the data was released in late 2019, with a break last year to account for Covid-related disruption.

However, while the group’s numbers compare favourably with Australia, the US and the UK, New Zealand as a whole continues to lag across many categories, and the country has almost the lowest level of female participation on boards across the entire business sector.

Spark chair Justine Smyth and Genesis Energy CEO Marc England are co-chairs of the CFC group this year. England told NBR the group was making a bigger difference at terms of female participation at the middle to senior management level than at the others.

“The key management personnel, which is really the executive level and CEO, we’ve not made as much progress over the last couple of years as we’d like,” he said.

“At the general management and senior management level, we’re seeing many more women coming into the workplace.” 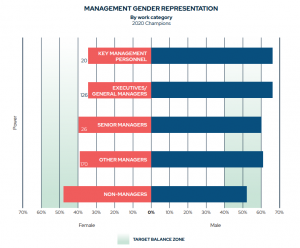 “But … I just caution we’re while we were really pleased with progress across the 39 group of companies – we’re doing well versus the average in New Zealand, we’re doing well versus other countries – it’s important to us that we can spread some of the learnings that are coming out of the Champions group to other organisations around the country so we can bring them along in the journey too and, when you look at New Zealand at the most senior level compared with Australia, for example, we don’t perform so well.”

In Australia, the data is sliced slightly differently but, for example, the latest figure on female participation on ASX-listed company boards is 32.9%. The CFC data shows there are far more Australian key management personnel across the workforce, at over 30% than New Zealand, at under 25%.

This year, the report describes both a power and participation gap with women across the group’s companies.

A Power Gap graph shows 70% of non-management being female with progressively less representation at higher levels of seniority.

The dynamics look different in each sector. In the Champions group in Financial and Insurance for example, while women hold 2 out of 3 non-management positions, men hold two out of three key management personnel (KMP) positions – a ‘flipping’ of gender representation, suggesting, the CFC report says, men are more likely to be promoted and/or hired into management roles in this industry.

“In this context, it is reasonable to ask whether 40% female representation in management is a fair goal for the financial and insurance industry. If 66% of its non-management workforce is women, it could be argued that the goal should be more ambitious.”

The participation gap, meanwhile, is slightly better, showing a low level of female participation overall (30%) but with women represented evenly through management and governance.

The reason it is helpful to understand the gender balance through these two frames is that they call for different responses from Champions, Marc England said.

“By breaking it down, we can start to understand where the issues are, and then we can solve it, he said.

There is also the issue of how to attack each issue: for example, in the case of a power imbalance, the response could include a combination of lateral hires, providing junior management opportunities (even by way of secondment) and investing in leadership development. Meanwhile, in the case of a participation imbalance, responses could include partnering with the education sector, scholarships and targeted campaigns in schools.

Covid has the potential to upset the apple cart, and has caused a greater loss of predominantly female roles than male roles in the worldwide workforce, but the Genesis Energy boss doesn’t believe the same will necessarily apply here.

“Going forward, I think companies are tuned into that [Covid effect on female progress] and companies are focused on making sure that they continue to create the settings that are right for women and Māori and other ethnicities to progress through the organisation too.

“And I’m quite positive that as we go forward, I don’t think in New Zealand, we’re going to see a material impact. As long as we stay focused on it.”

Companies belonging to the group include public entities such as ACC and NZ Police, all the major banks, utilities, and professional services firms, Fonterra, Fletcher Building, IBM, McKinsey & Company, and Ports of Auckland among others.

Across the 39 companies that report, some have met the 40-60% target balance in their management strata, with Auckland Council, Hays, Spark, and Westpac among those. Companies further from that balance across management bands include Ports of Auckland, Fletcher Building, Fonterra, ASB, and Bell Gully, which, according to the data, meets none of the targets in any levels of its business.

Of the companies that have belonged to the organisation since inception three years ago, in terms of key management personnel and general managers or other executives, none are meeting all their targets although Westpac, Deloitte, Paymark, and Spark are doing better than others. At lower levels of management, companies such as PwC, EY, Deloitte, and Contact Energy are faring well, while Minter Ellison, Fonterra, and Spark are lagging.

Hays managing director Adam Shapley said his company had still more to do and had launched a [equality, diversity and inclusion] ED&I Promise.

Fonterra CEO Miles Hurrell, meanwhile, said the company had a similar target: “We recognise we can always do more. In the year ahead, we will continue to hold ourselves to account through our aspirational diversity and inclusion targets.”

Commenting on his own company, Genesis Energy, England said the company had a drop off in key management personnel.

“When you get to kind of a thin group – the executive which are seven people, we lost one woman, gained one man, and that affects the statistics.

“But we’re building a foundation under there, which is strong. We’ve got over 40%, which is the target women in various levels in the organisation. So we’re making great progress. And we’re we continue to invest in leadership development, which is really important to to ensure everyone can give their best and develop for the organisation.”

Diversity in terms of ethnic representation at most levels in the group’s organisations continues to be a persistent challenge, particularly for Māori and Pacific peoples. This is a matter of both participation and distribution of power. 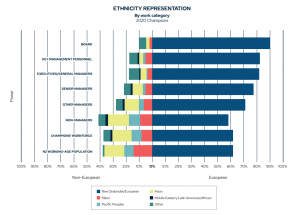 But a challenge to properly record people’s ethnicity also remains, which is why the data changes from survey to survey. New Zealand is unique internationally in basing its concept of ethnicity solely on the basis of cultural affiliation and self-identification, and there is no single, standard, international way of measuring and reporting of ethnicity where people are able to choose multiple ethnicities. There is also some reluctance to give or collect this specific data, England said.

“We often say in business, ‘you can only affect what you can measure’. So the most important thing is to be measuring these things,” he said.

“And as we start to measure we’re starting to affect change too, but it’s much harder to get that information, because when you ask employees what ethnicity they identify with, which can often be multiple ethnicities, it’s much harder to get that information, some don’t want to divulge it. The Champions group, which has grown, fractionally, its membership over the past two years, has started focusing on inclusion as a result of this data collecting roadblock.

“The key to unlocking true diversity within an organisation is to create an inclusive culture, where people are able to be themselves and bring themselves to work in an open and candid way. And that will encourage more data to be collected around ethnicity.”

Its a sentiment Mark Averill, CEO of PwC, agreed with, saying in recent years, PwC New Zealand had been broadening its diversity efforts beyond just gender to include all ethnicities, age and backgrounds.

“The aim is to create an inclusive culture where everyone feels they can bring their unique perspectives and life experiences to work, enabling them to deliver at their best.”

A blossoming Māori economy added to the imperative for change, and led to recruiting a new Māori partner who led the development of the Hauora consulting practice that now includes more than 40 Māori employees.