Pride Month may be coming to a close for the year, but that doesn’t mean our focus on promoting the equity of diverse people in the workplace is wrapping up. Our third and final article in this year’s #GWPrideSeries focuses on the realities for the LGBTQI+ women in our workplaces — and the adverse behaviour that can come their way.

Our Partner, McKinsey’s research shows that LGBTQ+ women experience the most microaggressions and sexual harassment in the workplace. Specifically, bisexual women report the highest rates of both, while being most likely to hear sexist and/or explicit comments about their gender and sexuality. 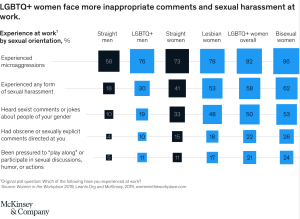 Additionally, women in the rainbow community face a raft of challenges. These include:

So what effect does this have on their career progression? Most importantly, what can employers, allies and changemakers do to shift the dial on this? McKinsey have rounded up their insights and recommendations in their ‘How the LGBTQ+ community fares in the workplace’ report HERE.