International Women’s Day is an opportunity to bring issues that affect women under the spotlight. For a few days the media and a wide variety of companies jump on the trend and shout loud about wanting gender equality. It’s a great PR coup, no doubt. But does anything really change? We took a look at the stories of the week to decide.

Ok… seriously cool to be selected to inspire young girls with the first ever NZ Barbie – she’s Maori … and a commentator! All part of Mattel’s role model program to help girls believe they can be anything. In this case you can be a sports journalist… a presenter… or a commentator. @barbie #barbie60

The story: Barbie has a new job: sports journalism. Her new look has been modelled on former Black Fern Melodie Robinson. The latest Barbie incarnation has been released as part of Mattel’s Role Model programme to inspire young women.

Behind the scenes: Mattel has been doing a great job in recent years of showing young girls that they can be whoever and whatever they want to be (we especially loved this video on the Dream Gap). The comments on social media show that some New Zealanders are over the moon that their children can finally play with a Barbie doll who looks like them. That said, Barbie has historically had a reputation for perpetuating gender stereotypes, unhealthy body image, and white beauty ideals.

The verdict: It’s great to see Barbie’s evolution as a role model for our kids. Sure, it’s a great PR stunt for Mattel, but that doesn’t take away from the fact that it’s a positive step forward in promoting diversity and breaking down old-fashioned gender stereotypes.

The story: The World Bank’s Women, Business and the Law report for 2019 has ranked New Zealand 36th in the world for its implementation of equal rights for women.

Behind the scenes: In a painful piece of news for New Zealand, we’ve been ranked behind Australia. The categories ‘getting paid’, ‘having children’ and ‘getting a pension’ all pushed us further down the scoreboard.

The ‘primary’ and ‘secondary’ carer approach to sharing new parents’ leave in New Zealand simply isn’t working. The lack of time off for dads, driven by this binary approach, impacts a man’s ability to raise his family, and a woman’s ability to return to work and progress her career.

The verdict: The government must update its antiquated parental leave policy if we aren’t to fall any further behind in the global rankings.

The story: The Hits Hawke’s Bay will be hosting an all female radio show on Friday to celebrate International Women’s Day. The Hits co-host Megan Banks said the show would highlight “some of the amazing women we have in Hawke’s Bay doing great things for the community, the business world and women’s issues in general”.

Behind the scenes: Good news that The Hits has realised that “A lot of our local women do so much that goes unnoticed.” If only they could focus on fixing this problem on the other 364 days of the year too. 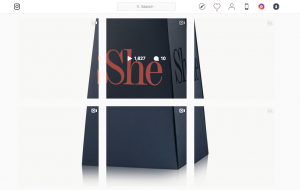 The story: SodaStream has announced that it is launching a limited edition, collectible “SHE” reusable bottle that celebrates women who have made impactful changes and encouraged women to take a stand. The limited-edition bottle is wrapped in unbranded “SHE” packaging, which opens to reveal and celebrate stories of iconic women that have influenced our world.

Behind the scenes: The limited-edition bottle is not actually for sale and only available in a social media giveaway.

The verdict: PR stunt all the way.