How to be a role model for women 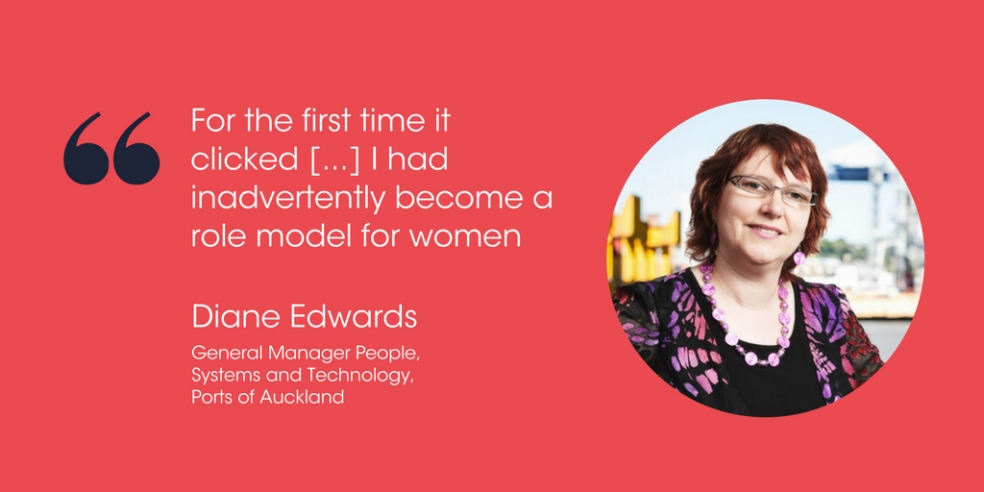 This article was first published by WISTA International to celebrate five years of the Women’s Shipping and Trading Association (WISTA) in India. WISTA is a network of over 3,000 women in management within the maritime industry, with 40 chapters worldwide. Diane is a member of their Global Executive Committee, which governs and supports the local chapters.

I never set out to be a gender role model. Growing up I had certainly believed that girls should have the same opportunities as boys and that there should be no discrimination in the workplace. I sympathised with the feminist movement of the 1960’s and 70’s but felt that their tactics were too confrontational and likely to polarise opinion rather than facilitate discussion.

Instead I fell into the “if I work hard and perform well I can still succeed in business” category. That worked really well in the early days of my career as I became known for my work ethic. Moving from a female friendly occupation (teaching) to a male dominated industry (corporate banking) first alerted me to the error of that strategy. I experienced the glass ceiling first hand when I tried to move into a senior management role and was told I would be better suited to retail where feminine leadership traits would be more useful than in the hustle of the dealing rooms. Male managers were condescending and in more than one meeting I was mistaken for the secretary while they talked business to my (male) personal assistant.

At that time there were not some of the protections we have now and rather than succumb to a victim mentality, I chose to be proactive and left to start my own company. Over the next fifteen years I built up a successful company consulting to a wide variety of businesses. I had been fortunate that during my time in banking I had been able to develop skills in a variety of areas from finance, to IT to human resources, so I chose to specialise in strategic change management, an area requiring knowledge of all these areas and about which I am passionate, having seen it done badly so many times. It was in this capacity that I first came across the maritime industry.

Back in 2003 I had the opportunity to work with P&O Nedlloyd in New Zealand, where change was needed as it was preparing for listing/sale. After they were bought by Maersk I was again brought in, this time to assist in managing the merger of the two workforce cultures in New Zealand. For both assignments I was required to fully understand the global shipping processes and the role of each key individual in those processes. My maritime career was launched!

Cutting a very long story short, years later in 2011 the former CEO of Maersk New Zealand invited me to come and assist with the changes required to turn around a port in trouble. He had been appointed as a change CEO and remembered how I had helped, so I travelled to Ports of Auckland to see how I could support him. The plan was formulated and I was invited to join the Executive Team to oversee the change. Moving from my consulting firm back into a line role had not been in my life plan, but the lure was irresistible.

How many times are you offered the opportunity to make a difference, not just to individuals or for a company but potentially on a national scale? Not often. So I seized the opportunity and joined the Executive. The next day I was informed, to my total astonishment, that I was the first women to ever hold an Executive position at the port. It took 178 years but I suppose they got there in the end!

But the surprises did not stop there. Owned by local government I was required to report on the male/female ratio each year. That first year I was ashamed, yes ashamed, to report that the ratio was 11:1 with no women other than myself in substantive management roles. Finally the spark was ignited and I decided I needed to take a stand.

I have never believed in quotas. They are divisive, by creating doubt about merit and fears about tokenism. So instead I focussed on removing the systemic barriers that were holding women back. The story of how this was done is the topic of a different article, but suffice it to say we made changes to our leadership competency model, our recruitment practices, our performance criteria and our leadership training. We introduced flexible working (for both women and men). We addressed the issue of equal pay and started tracking the gender pay gap and gender statistics to monitor our progress.

Turning the Ship Around

The proof, of course, is in whether it made a difference to the business. Our CEO frequently cites our culture change and diversity initiatives as the key catalyst in saving the company, underpinning, and often enabling, the other changes we made to processes and technology. In 2011 Ports of Auckland had the lowest productivity in Australasia, was not making cost of capital and had a toxic culture with management and unions at loggerheads. By 2015 it was not only making cost of capital, profits enabled significant investment in infrastructure for the first time in fourteen years. We became the most productive port in the Australasia. In 2016, for the first time we won the Best Port in Oceania award as voted by shipping lines, a feat we repeated in 2017. We announced our plans for automation and our unions agreed to work with us, something that would have been unthinkable six years before. At every level, the business had turned around.

As far as female participation goes, we now have about 15% female stevedores, approximately 25% women in management, including operational leadership positions, and most excitingly, 67% of our identified high potential staff are now female. We have women being prepared for Executive positions in Infrastructure and Operations and have made inroads into our engineering and IT areas with female managerial appointments for the first time.

All this positive change has attracted attention. We have featured widely in both the NZ and Australian media and I have been asked to speak at conferences further afield in Europe, Asia and the Americas. I was also humbled at the Women on Boards/ Governance New Zealand national awards to be given the award for Gender Diversity Leadership 2016.

Then a few weeks ago, the media interviewed three of our high potential female managers who had worked at the Port for several years and asked them what had changed for them. To my surprise they all said that the single biggest factor was having a role model that showed that a women could be a respected member of the Executive team and effect positive change.

I asked them more about this after the interview and for the first time it clicked. Without any deliberate intention, but by following my conscience in addressing the issues, I had inadvertently become a role model for women in the maritime industry. So now I need to ensure that I do not pull up the ladder behind me, by offering a helping hand to ensure that our talented women, of whom there are many, are given the opportunities and recognition they deserve.