In 2017, approximately 300 New Zealand men took paid parental leave in 2017 versus more than 30,000 women. That’s less than 2%. As we discuss the case of sharing parental leave and how this will help close the gender pay gap, we’re joined by guest blogger Matt Prichard as he relays his experience of going on ‘Manternity’ leave. 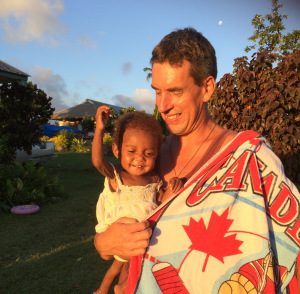 In late 2015, I took nine months off work to look after our four kids (aged 4 months to 7 years), and support my wife’s new, extremely busy, work commitment. Right near the end, I had a new baby. Six weeks later, I went back to work expecting to be able to perform as I always had, and pick up my career where I’d left off.

Boy did I get a shock.

The context was pretty exciting. I had a great career with KPMG, Leanne had a challenging and demanding career as an Emergency Medicine specialist doctor. We’d lived and worked in different countries. We had four great kids. We had the means to take the time off, and had a connection to a Canadian medical charity who had provided voluntary medical support to the people of Tanna island, Vanuatu for twenty five years.

In early 2015, the island was hit by Cyclone Pam, the worst natural disaster ever to hit that region. Leanne and I decided we would take the family there to help out. Both KPMG and Waitemata DHB were encouraging and accommodating.

Life on Tanna was tough, but immensely rewarding.  Full-time dad meant home-schooling the two eldest kids, and a lot of time finding food (fresh fish and veges or it had to come on a ship), and constant loads of washing in the bath tub. The full story of our time there as a family is here.

Near the end of our time there, the family expanded to seven when Leanne brought home Pam one lunchtime.  Pam was nearly one year old, and was a 4.2kg bag of bones with a range of infections and other health problems.

Being dad to Pam meant three-hourly feeds, 24 hours per day, nursing her sores, and dealing with the frequent nappy changes and washing that came with her health issues.

After three weeks when she was supposed to be heading back to her parents she’d nearly doubled in weight and two things had happened. Firstly, I’d fallen madly in love with her. Secondly, her teenage parents had come and asked us to keep her and look after her, as they were unable to support her.

What followed was a stressful five weeks of intensive legal process to achieve an adoption under Vanuatu law, and a miraculous immigration outcome that allowed us to bring her back home to New Zealand with us.

Back to work shock

We flew home to New Zealand on a Saturday, and on the Monday, the kids went to school and I went back to work. I hadn’t given it much thought. We’d been away from New Zealand for long periods before. I’d always slotted back in to my work in New Zealand pretty easily.

Without being at all prepared for it:

I didn’t cope very well for a while. I had to physically leave the building to get my head straight on a frequent basis. I very nearly chucked it all in, even though I knew I had a career I used to enjoy, and a very young family, who needed me to be contributing financially for a long time to come.

Eventually I told the people I knew best how I was struggling. I asked them to involve me in work they were doing, take me to client meetings, and give me things to do that would help me get my head back into my work.

I also went looking for a challenge that I could take on myself, and handle at my own pace, but that would give me professional satisfaction if I could build it into something.

These things worked eventually, and I got back to a position where work is challenging and rewarding, and I have a balance of work and family that I’m happy with.

Nothing unique except my gender

It took me a while to stop feeling sorry for myself. When I did, it was partly from talking to women I worked with, and the realisation that everything I had struggled through was pretty standard for a lot of women in my work environment.

I’d been a senior leader in our business for years. I’d been part-time, helping look after our first two kids for six months each when they were born. I’d helped lead discussions about improving gender diversity, and even led a study that concluded our practices around maternity leave were a key barrier to achieving gender diversity at partner-level. I thought I was pretty tuned in. But I’d been clueless really.

I had no idea until my own ‘manternity’ experience what it was really like to go from the intense experience of caring physically and emotionally for a new baby, to reentering the workplace and trying to pick up where I’d left off as if nothing had happened.

We have to do better

We have to do better.  If we don’t, we’ll continue to lose far too many of our most talented people, right at the peak of their skills and energy – simply because we don’t have insight into the perfectly common, perfectly ordinary experience of taking time out of our business to have a baby.

This isn’t a blog about ‘bad men’ leading businesses and consciously discriminating against women, or choosing to have poor policies and practices around maternity. I’ve never worked with any of those.

It is about most ‘good men’ not really having any experience of the true intensity of maternity, and the real difficulties of reintegrating into work life. Global Women’s ‘Kiwi Dads’ exhibition is a great initiative to celebrate and normalise working fatherhood.

It’s also obviously about more women leaders, who’ve had the personal experience of maternity and return to work, leading our businesses and making decisions about the policies and practices that will make it less traumatic, and more successful.